On March 7th eighth graders at WMS had the pleasure of listening to George O’Connor, the author of the Olympians series. Currently in the series O’Connor has written six out of twelve books.

Making it fun for everyone, George O’Connor elaborated on his books giving us an insightful look at his work and blended humor into the assembly. He gave us a look at the characters of his books that have been released and background on himself.

Always being interested in mythology, he said he often drew monsters, people to fight the monsters, and ladies. Asked what he used to draw his pictures, he told us that he did a rough sketch, an inked copy, and then scanned in his drawings and used a Wacom tablet to work on adding color to his books.

One of his pieces of advice was to sketch fast to avoid being too judgmental. He says that we, as kids try to draw things to perfection instead of just doing multiple sketches that will benefit our drawing skills. He then took requests from students and drew on an easel paper  Poseidon and Aphrodite for the eighth grade.

Many agree that all of these graphic novels are definitely worth reading. George O'Connor gave select students a copy of one of his books.  His current books are: Zeus King of the Gods, Athena Grey-Eyed Goddess, The Glory of Hera, Hades the Lord of the Dead, Poseidon Earth Shaker, and Aphrodite Goddess of Love.

We can expect him to publish six more books featuring other Olympian gods. 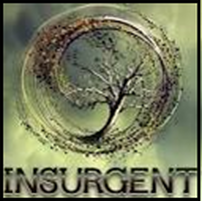 In the fall edition of our newspaper, Julia Kudewicz had written a book review on Divergent. Following is a book review about the second book in the series, Insurgent.

Description: Tris and Tobias have to seek refuge in the Amity compound. In order to keep everyone safe, Tris and her friends must spy on Johanna, the leader of the Erudite. Turns out, Johanna has a secret, and Tris must know it. Little does Tris know, the worst is to come. This is a story of heartbreak, action, and suspense.

My opinion: It is one of the greatest books I have ever read. It only took me four days to read it. I rarely put it down and read until 2 AM. There were some parts of the novel when I was happy, sad, heartbroken, scared, and taken away-- big twists in the story that were so sudden and suspenseful. Being a girl, I loved the romance. If you haven't yet, I encourage you to read Divergent, so you can then read Insurgent.