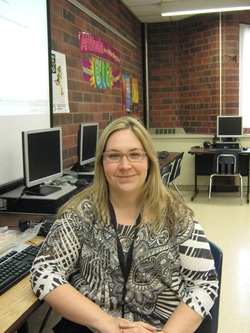 Congratulations goes out to Mrs. Kwiczor, music teacher, who is our 2014 Teacher of the Year.

Recently, I sat down with her and asked her a few questions. First, I asked her how she found out she was accepted into this award?  She told me that she was setting up the stage for the Soro-Bindi performer and Mr. Southland came in and asked her if she checked her email. The teachers recommended Mrs. Kwiczor for this honor.

When I asked about her childhood, she said, she is not originally from the USA.  Did you know that Mrs. Kwiczor was born in Poland? She did not become an official United States citizen until she was 14 years old?  She said she grew up in Meriden and went to Platt. She said she moved almost every year until she got to high school. She said she took all of the music classes that Platt offered.  These classes, she said helped to inspire her to become a music teacher. She said she absolutely knew she wanted to teach music or art by her junior year of high school.

"I'm very lucky to have a supportive family of teachers and students at Washington Middle School,” she said. 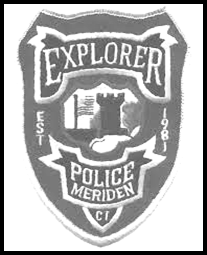 A nonprofit community service organization, The Meriden Police Explorers supports and volunteers with local law enforcement.  Meet every Thursday at either the shooting range or at the police station in Meriden, The Meriden Police Explorers support local events on the weekends. For example, they  volunteer by blocking off roads, looking for missing children, guiding cars to park at events, and other activities to support local law enforcement.

When Explorers have meetings, they learn about law enforcement and occasionally have sessions of physical training. Physical training includes pushups, sit-ups, leg lifts, and running. Additionally, explorers take a safety course and learn how to shoot a .22 caliber pistol.  Explorers practice their shooting by aiming at targets. ﻿ Each year Explorers take part in two competitions.  At the Connecticut Police Academy they complete team building activities and compete against  explorer groups from other towns.  For example, they show off their physical fitness skills on the obstacle course and demonstrate their knowledge about domestic violence and motor vehicle stops.If someone wants a taste of law enforcement, The Meriden Police Explorers is great organization.  Contact Officer Mike Hadvab at Meriden Police Department headquarters or like on Facebook for more information.