One school one book 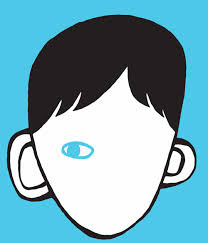 Wonder, by R.J. Palacio, became a hit among students and teachers here at Washington. The book, read by the entire school during the month of January, has a powerful message about bullying and how to tolerate differences

At school everyone got in on the act, such the school administration, teachers, the nurse and even the custodians.  Each week, our morning broadcast showcased students responding to questions like: What is your favorite character? What do you like most about Auggie? One answer from our student body was, "I like Auggie the best because he doesn't care about what other people think and he knows he is a good friend," said Lilliana Murdy.

The teachers loved Wonder just as much as the students. "I think that Justin is the best character because he accepts Auggie and stands up for Jack by confronting Julian," replied Mrs. Flanagan. She said she loves the idea of the One School One Book program and the fact that it came to our school this year. She enjoyed that everyone read the book together and got to be a part of this activity.

As an ILA teacher and designer of the Wonder bulletin board featured outside the office, Mrs. Flanagan said she loves seeing her students talk about the book together and learn more about literacy.   The school wide connections to Wonder did not stop there.  Each week there was a trivia question to be answered in homeroom. The students were also treated to a grade level trivia game. Competitive,  the trivia game gave students and teachers a chance to test their knowledge of the story. Students also discussed the themes of the book in dvisory class. When students finished reading they had the opportunity to earn points by taking an AR quiz on the book and receive a certificate of completion. Lilliana says, she likes that the book is written from each person's point of view.

Mrs. Flanagan says, "I like this form of writing because it lets the reader know about each individual character and helps them better understand the story even if it is a bit confusing at first.

The book Wonder was a good choice for our school because it shows readers how to be considerate of all people, no matter what they look like or how they act." One School One Book seemed to be a favorite school program among many. 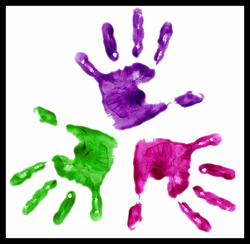 Builders’ Club, advised by Mrs. Donna McBride and Mrs. Monica Moore, loves helping the community, which is one of the main things they do.

Drives for clothing, canned food, and pet food are ongoing. This year, every piece of clothing they received was donated to Goodwill which, in turn, sold all the items in their store. The money Builders' Club took from Goodwill was donated to the homeless, job training, and many more great organizations. The drive ran November 12th to December 18th.

Later this year, they will run a canned food drive to donate the all the items they collect from the drives to many organizations, such as the Meriden Soup Kitchen, Humane Society, and Relay for Life.

Founded by the Kiwanis Club, Builders' Club first started in 1975. Mrs. McBride recently said that Builders' Club is for people who like to help others. She also said if you want to join the Club, you have to go to the first meeting at the beginning of the year.

At Washington Middle School, Builders' Club meets every other Tuesday, and they help the community very much. 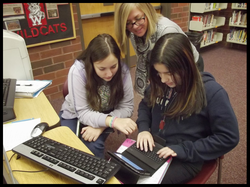 Each class was divided into groups of 2-3 people and each group was also assigned a country in which they communicated. Each member of the group was matched up with a person from that country to whom they wrote.

Using Google Drive, the classes shared their documents with their group members and teachers. The website ePals.com was used to write to their ePal letter.

Also, ePals allows students to translate the letters into English or the language of the country in which they were sending it to. The letters the students wrote included information about their school life, hobbies, interests, and three to five questions which would be answered in the next letter by their ePal. In addition, each group in the class created a PowerPoint in which they featured research about the country. Mrs. Atterberry said, "It's awesome to see  our students communicating with other students from around the world.” Brooke Lavalle shared, "It was an exciting experience because we got to collaborate.”

To conclude, students shared their findings with their class and answered the essential question: How does geography, culture, economy, and political characteristics of a country influence its people? This project recently was awarded the Meriden Public Schools Exemplary Achievement Project Award.

A way to show us what students like to do outside of school, the 2014 WMS Talent Show was quite the production this year.

“The talent show is one of my favorite rewards to go to because I like to see other students’ talent and it inspires me to find a talent of my own," said Brooke Lavalle of Cluster Six.

“I don’t have a favorite act, but one that really stood out to me was a band called The Fuse; they seemed to really get the crowd going,” said Mr. Weber. He said he thought we should have a talent show because, “We want to reward students for good behavior; we want students to be involved.”